Sally began working with Milestone Financial Solutions in March 2000. She specializes in group medical and dental insurance, group life and disability insurance, individual medical coverage and Medicare Supplement Coverage. Sally has 19 years' experience in the healthcare field and over 40 years of experience in administration and operations. Sally thoroughly enjoys working with our clients and helping them to find the best coverage to fit their needs at an affordable price.

Eva has over 40 years of experience within the Financial Services industry; she started with The Equitable while in high school and helped clients with various service issues until she left in 1999 to join Jacobs Financial Group, now Milestone Financial Solutions. Eva's experience and knowledge often make her the first point of contact for clients with questions about their policies and accounts.

James A. “Jimmy” Jacobs ChFC, CLU began his career in the financial securities industry on January 1971 with Equitable Life, in Petersburg, VA.

In 1990 he opened his own office, Jacobs Financial Group in Chesterfield, VA.  March 2018 he changed the company name to Milestone Financial Solutions, LLC and in September 2018 Jimmy made another transformation, after 47 years with AXA Advisors, changing his broker dealer to The Leaders Group, Inc. and TLG Advisors for future expansion and business continuity.

In 2003, Jimmy was named National Honor Agent by AXA Advisors, THE HIGHEST AWARD IN THE COMPANY. This is given annually by the AXA Old Guard based on career production and industry and community service.

He has been extremely active in the industry: NAIFA member for 48 years, MDRT for 47 years, and American Society of Financial Professionals (ASFP) since 1976. He was also on the Life Foundation Board from 2007-2011.  He is currently a member of the Forum 400 and Life and Qualifying Member of Top of the Table division of MDRT.

Jimmy has spoken to numerous Life Underwriters groups throughout the United States and Canada, several National Equitable conferences, and has been a speaker at the prestigious Million Dollar Round Table seven times including main platform in 2003.  He was a main platform speaker at the Top of the Table annual meeting in 2006, and a main platform speaker at the MDRT Hour featured during the 2001 annual NAIFA Convention.  Jimmy has been published several times in Life Insurance Selling and Life Association News.  In October, 2001, he was featured in Newsweek as one of five national winners in the Real Life Stories competition sponsored by NAIFA and the Life Foundation.  Again in 2015 he was one of five national winners of the Life Foundation Real Life Stories competition and spoke at the NAIFA, 2015 annual convention.

Over the years, Jimmy has also been active in the community.  He served as chairman of the Petersburg High School 60's Mega Reunion Committee – a reunion of the 60's decade held in September, 2000.  Over 750 people attended this event.  He is also past co-chairman of Corporate Funding for the Appomattox Regional Governor's School in Petersburg, a school for gifted students in technology and the arts.  In 2003, he served as chairman of the Southside Virginia United Way campaign. From 2006-2009, he served on the board of the Hospitality House in Richmond, VA. He chaired a second PHS Mega Reunion in September, 2007.  Over 500 classmates and guests attended that 3-day event.  And a third PHS Mega Reunion was held at Kingsmill Resort in Williamsburg, VA, September 2015. 340 classmates and guests attended the 4 day–3 night event. He currently is a member of the new Chesterfield Arts Foundation Board and the Arts Center which is scheduled to begin construction in early 2019.

Jimmy and his wife, Isabel have two married children and three grandchildren. 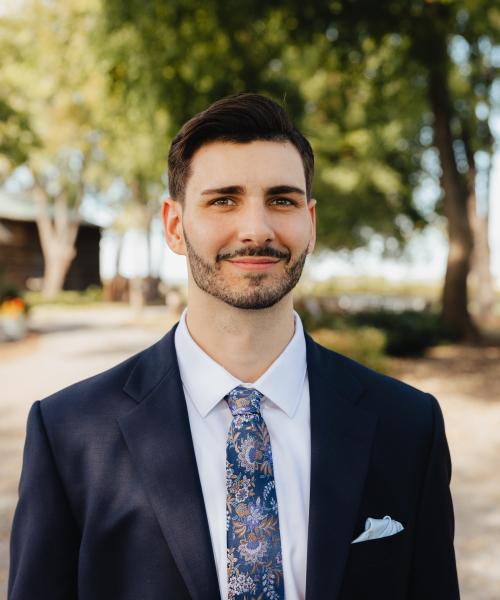 Brandon started his career in Financial Services in 2015 while completing his Master of Business Administration at The University of Mary Washington in Fredericksburg, Virginia. Upon graduation, Brandon moved to the Richmond area and shortly thereafter joined Jacobs Financial Group, now Milestone Financial Solutions. For the past five years, Brandon has been delivering great value and expertise to clients and the firm by using his diverse skillset for both short and long term financial and business planning. Brandon is fully dedicated to the success of the individuals and businesses that trust Milestone with their financial security. An Eagle Scout, he can be found enjoying time off biking, camping, and hiking through Virginia's State Parks. Brandon has just recently completed studies at The American College for Financial Services for the Chartered Life Underwriter designation, he plans to continue his education in financial and estate planning by pursuing further designations.